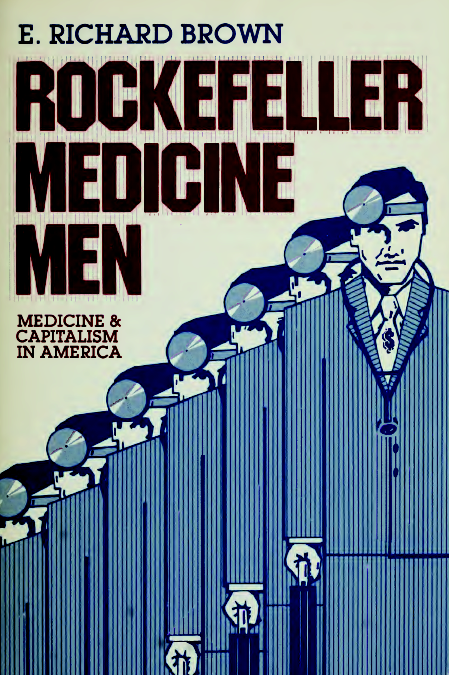 How Rockefeller took Control of the Medical School System 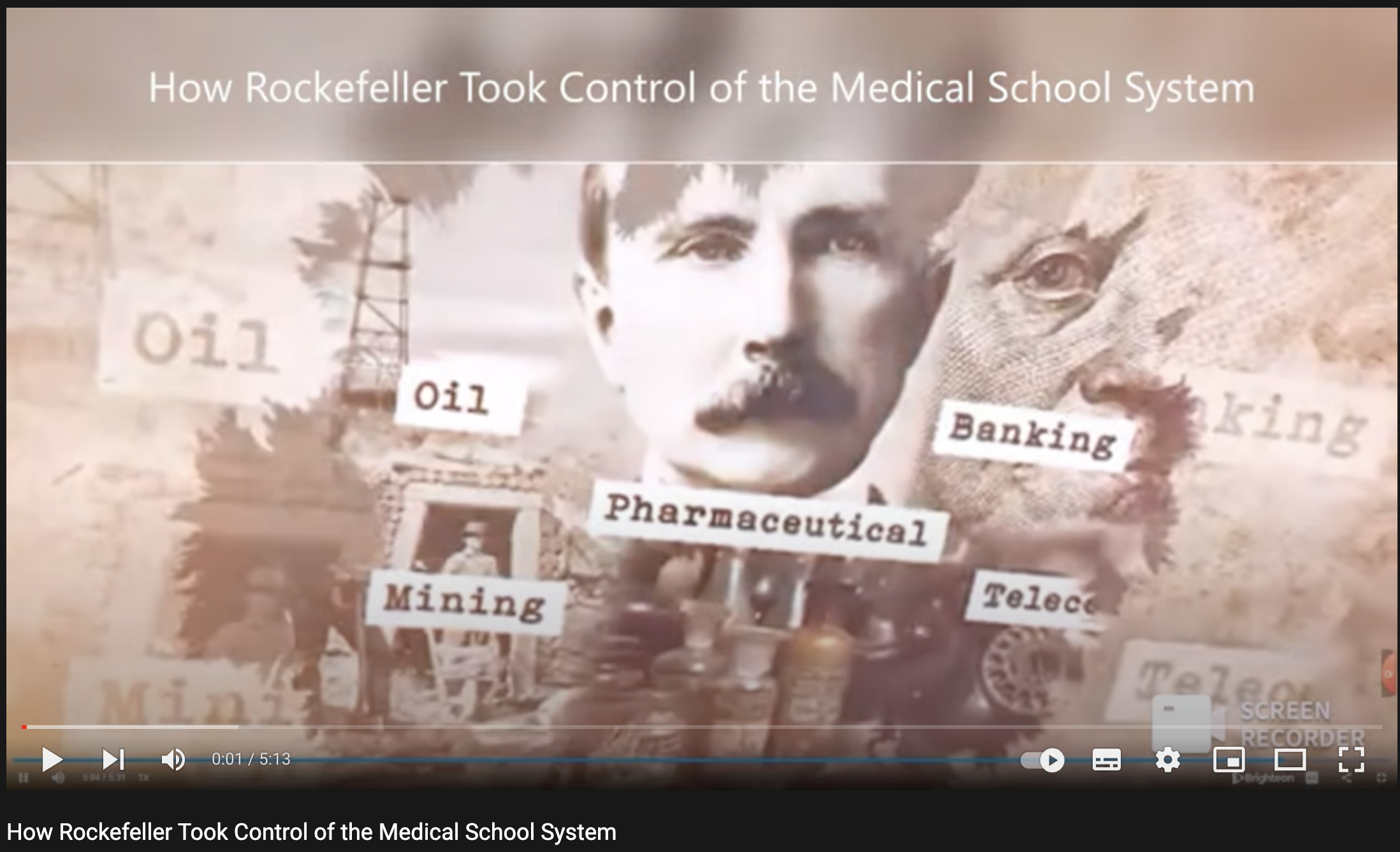 At the dawn of the 20th century John Rockefeller's ruthless maneouvering including bribery price fixing, corporate espionage and creating shell companies to conduct illegal activities had won his standard oil company control of 90% of US oil production and made him the richest man in world history with a net worth of over half a trillion of today's dollars.

In 1913 he incorporated the Rockefeller Foundation. A congressional investigation described the foundation as a self-serving artifice posing a menace to the future political and economic welfare of the nation. Using his foundation's wealth and influence and working with his friend Andrew Carnegie, Rockefeller dispatched educator Abraham Flexner on a cross-country tour to catalog the status of America's 155 medical colleges and hospitals.  Full video transcript on Post Rockefeller's Order

The history of 'medicine men' includes Anthoni Fauci (Head of Centre for Disease Control USA) Robert Kennedy Jr. discusses his book 'The Real Anthony Fauci: Bill Gates, Big Pharma, and the Global War on Democracy and Public Health' which he believes will result in his resignation.

Rockefeller set us on a course of toxic, profit-driven medicines synthesized from the byproducts of the oil refinery process a century ago, and Gates picked up where he left off and then collaborated heavily with Fauci. ~ Dr Mercola  (Global Research Article)

Patents make Fauci a lot of money. He's an incubator for pharma because 230 drugs approved came from his department in 2009-2016.  Trials in universities bring in pharmaceutical companies to finance, and also keep Patent money.  FDA committee rubber stamps Fauci's drugs. That same committee approves covid vaccines for 5-12yr olds in 2021.  The covid catastrophe is the "culmination" of Fauci's career.

In 1968 chronic children's disease was 6%, but increased to 54% in 2006 under Fauci's watch.  They only metric they have on public health, is how many vaccines do they have and money made.  Most of Fauci's salary comes from military bioweapon research.  63% of the bio medical research on Earth is controlled by Fauci, Gates Foundation and The Wellcome Trust.  They have capacity to cut off funding and ruin careers of anyone researching the reasons for increase in chronic diseases starting in 1989.  Kennedy suggests causes include RoundUp ready corn (pesticide glyphosate), ultrasound and vaccines.  Experiments and coverups were done in Africa.  Swine flu, Bird flu and others are explained by Kennedy as fake pandemics, which were learnt from to bring about Coronavirus 'pandemic'.     [From interview Dr Mercola and Robert Kennedy Jr.]

Make medicine serve their own interests.  A medical system, as a health care industry, that poorly serves society.  At first doctors didn’t want government to control their business but they were inevitably indoctrinated with training in Rockefeller funded medical schools, especially to promote their 'modern' medicine; not only with new fundamental knowledge, but to cure everything with chemicals.

In the 1920s Rockefeller tried to change Chinese medicine.  His foundation bought the Union Medical School and renamed it the Peking Union Medical College; in effect a laboratory for their social ideas.  They introduced John Hopkins model.

1800s society sanctioned both approaches: aleopathic and homeopathic medicine.  Allopaths used scientific theory as ‘heroic medicine’; using toxic mercury and lead to displace disease, in their ignorance whereas homeopathics (Impirics) worked with the body's ability to heal itself.  (Whilst we know now only surgery can help in some instances, there is still a large place for homeopathic treatments)

AMA, American Medical Association, joined with big money (Karneggie, Morgan) to finance surgery, radiation and drugs.  This would become the new medical economy.  [G Edward Griffin, 'World Without Cancer' quotes.] Bankers had people on board of directors in exchange for grants.  Schools were taken over by bankers overnight.  All leading towards pharmaceutical drugs.  Within 20 years, doctors were all taught about drugs, trained to give prescriptions; supporting a Patented medicine business.

Rockefeller have their men on all the drug boards.  Nature is no good as far as big pharma is concerned, due to low cost of raw ingredients which are available in abundance; despite thousands of years of humanity's discoveries, naming plants 'pharmacia' when known to have medicinal qualities.

Corbett asks: "What compels them?"  Profit motif? Medicines also rely on petrochemical based medicines, which they already had access to and funds from.  Their motivation is power and control since they have access to all sources of money.

In 1960s Rockefeller’s funded WHO funded task force in fertility vaccines for fertility regulation which eventually succeeded in developing an anti-HCG, a vaccine which caused spontaneous abortion in vaccinated women.

“There is a driving motivating guiding ideology behind these economic elites: and it is a desire to get rid of you and me....."   James Corbett

Big pharma has been against Dr. Coleman since 1970s, but he continues to give recordings of his thoughts on the dangers of the new Covid doctrines.  Consequently his YouTube videos mentioning vaccines are often censored by deletion.  The transcripts are always on his website

‘…what he says of the present is true: and it is the great merit of the book that he says it from the viewpoint of a practising general practitioner, who sees from the inside what is going on, and is appalled by the consequences to the profession and to the public.’
Brian Inglis, Punch 21.5.1975

‘’The Medicine Men’ by Dr Vernon Coleman, was the subject of a 14 minute ‘commercial’ on the BBC’s Nationwide television programme recently. Industry doctor and general practitioners come in for a severe drubbing: two down and several more to go because the targets for Dr Coleman’s pen are many, varied and to say the least, surprising. Take the physicians who carry out clinical trials: many of those, claims the author, have ‘sold themselves to the industry and agreed to do research for rewards of one kind or another, whether that reward be a trip abroad, a piece of equipment, a few dinners, a series of published papers or simply money.’ The Pharmaceutical Journal, May 17 1975

‘The Medicine Men’ is well worth reading.’
Times Educational Supplement 6.6.75

‘Vernon Coleman, aged 28, is not a mine of information – he is a fountain. It pours out of him, mixed with opinions which have an attractive common sense ring about them.’
Coventry Evening Telegraph 12.5.75

Rockefeller was someone who steered the path of America through foundations funded by his wealth and set up the Bilderberg conferences explained by Jay Dyer.