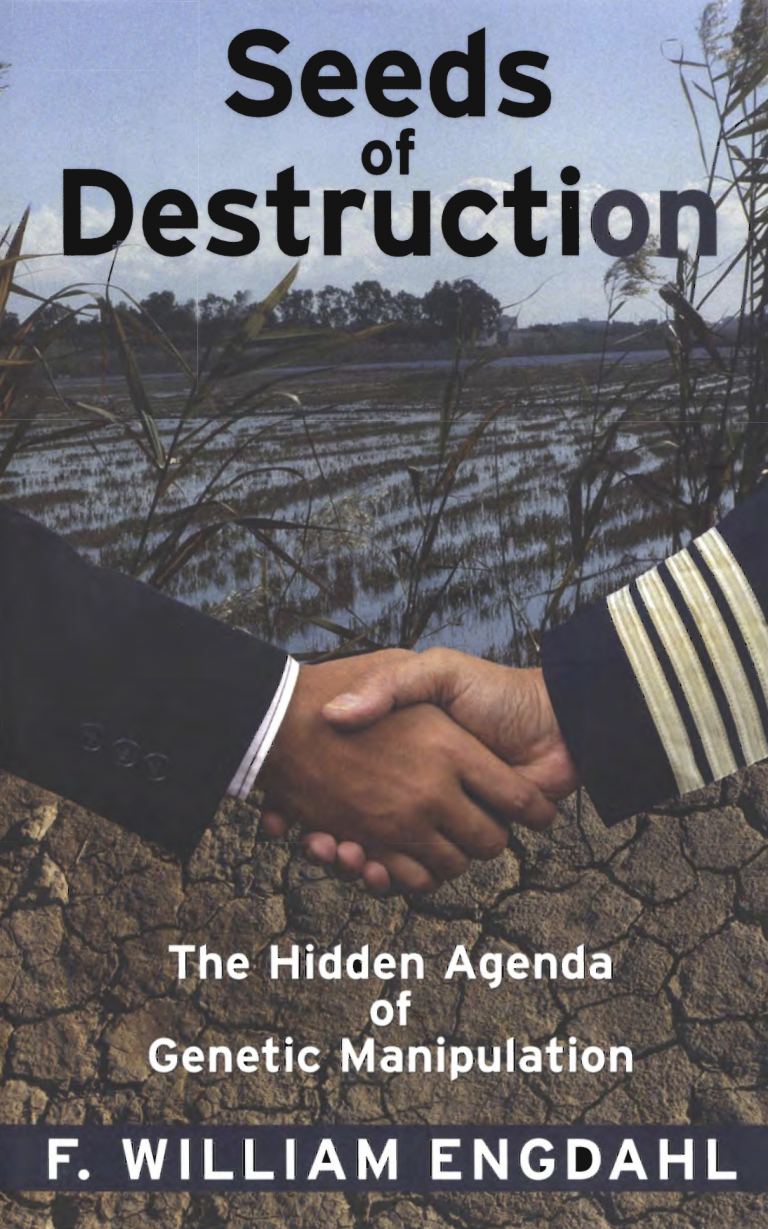 An all out assault on Argentinian farmers by the pharmaceutical industry

By the mid-1990's, the Menem government moved to revolutionise Argentina's traditional productive agriculture into monoculture aimed for global export. The script was again written for him in New York and Washington by foreign interests, constituted above all by the associates of David Rockefeller.  Menem argued that the transformation of food production into industrial cultivation of GM soybean was necessary for the country to pay its ballooning foreign debt. It was a lie but it succeeded in transforming Argentine agriculture into a pawn for North American investors like David Rockefeller, Monsanto and Cargill Inc.

Following almost two decades of economic battering through mounting foreign debts (P. 181 causes), forced privatisation and the dismantling of national protective barriers, the highly-valued Argentine agricultural economy would now be the target of the most radical transformation of them all.  In 1991, several years before field trials were implemented in the United States, Argentina became a secret experimental laboratory for developing genetically engineered crops.  The population was to become the human guinea pigs of the project. Menem's government created a pseudo-scientific Advisory Commission on Biotechnology to oversee the granting of licenses for more than 569 field trials for GM corn, sunflowers, cotton, wheat and especially soybeans. There was no public debate on the initiative of either the Menem government or the Commission on the controversial issue of whether or not GMO crops were safe. (P. 183)  The Commission met in secret and never made its findings public.  It merely acted as a publicity agent for foreign GMO seed multinationals. This was not surprising as the Commission members themselves came from Monsanto, Syngenta, Dow Agro Sciences and other GMO giants.

In 1996, Monsanto Corporation of St. Louis Missouri was the world's largest producer of genetically-manipulated patented soybean seeds: Roundup Ready soybeans.  In 1995 Monsanto introduced Roundup Ready (RR) soybeans that had a copy of a gene from the bacterium Agro bacterium sp. strain CP4 inserted by means of a gene gun into its genome.  That allowed the transgenic or GMO plant to survive being sprayed by the non-selective herbicide, glyphosate. Glyphosate, the active ingredient in Roundup, killed conventional soybeans. Any conventional soybean crops adjacent to Monsanto Roundup Ready crops would inevitably be affected due to wind-borne contamination.  Conveniently, that greatly aided the spread of Monsanto crops once introduced.  The genetic modification in Monsanto Roundup Ready soybeans involved incorporating a bacterial version of the enzyme into the soybean plant that gave the GMO soybean protection from Monsanto's herbicide Roundup.  Roundup was the same herbicide used by the US Government to eradicate drug crops in Colombia.  Thereby protected, both the soybeans and any weeds could be sprayed with Roundup, killing the weeds and leaving the soybeans. Typically, rather than less herbicide chemicals, GMO soybeans required significantly more chemicals per hectare to control weed growth.

Since the 1970's, soybeans had been promoted by large agribusiness seed companies to become a major source of animal feed worldwide.  Monsanto was granted an exclusive license in 1996 by President Menem to distribute its GMO soybean seeds throughout Argentina. (P.184)  Simultaneous to this wholesale introduction of Monsanto GMO soybean seeds and necessarily the required Monsanto Roundup herbicide to Argentine agriculture, now ultra-cheap (in dollar terms), Argentine farmland was bought up by large foreign companies such as Cargill-the world's largest grain and commodity trading company-by international investment funds such as George Soros's Quantum Fund, by foreign insurance companies, and corporate interests such as Seaboard Corporation.  This was a hugely profitable operation for foreign investors, for which GMO Monsanto seeds were ultimately the basis for a giant new soy agribusiness industrial farming.  Argentina's land was to be converted into a vast industrial seed production unit.  For the foreign investors, the beauty of the scheme was that compared with traditional agriculture, GMO soybean needed little human labor.  In effect, as a consequence of the economic crisis, millions of acres of prime farmland were put up for auction by the banks. Typically, the only buyers with dollars to invest were foreign corporations or private persons.  Small peasant farmers were offered pennies for their lands. Sometimes, when they refused to sell, they were forced off their properties by terrorist militia or by the state police.  Tens of thousands more farmers had to give up their lands when they were driven to bankruptcy by market flooding of cheap food imports brought in under the free market reforms imposed by the IMF.

Additionally, fields planted with the GMO "Roundup Ready" soybean seeds and their special Roundup herbicide required no ordinary turning over of the soil through plowing.  In order to maximize profitability, the sponsors of the GMO soybean revolution created huge Kansas-style expanses of land where large mechanised equipment could operate around the clock, often remote-controlled by GPS satellite navigation, without even a farmer needed for driving the tractor.  Monsanto's GMO soybean was sold to Argentine farmers as an ecological plus, utilising "no-till" farming.  In reality they were anything but environmentally friendly.  The GMO soybean and Roundup herbicide were planted with a technique called "direct drilling," pioneered in the USA and with the purpose of saving time and money.