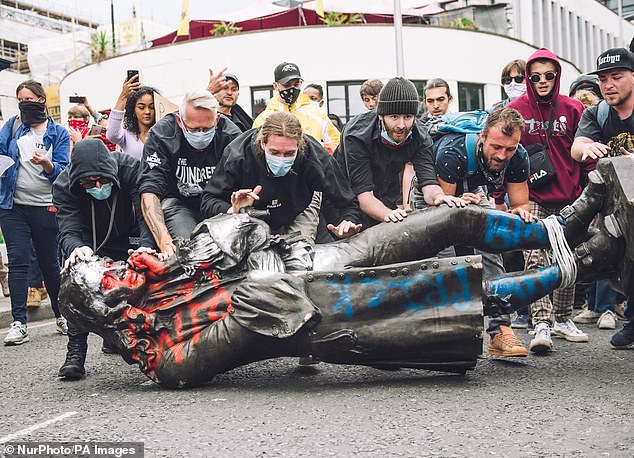 Article in The Inquisitr shows Tweet by Artisit Mark Quin explaining his inspiration behind the sculpture when he saw Jen Rein make a black power fist salute after the removal of Edward Colston statue in Bristol.  The irony of this expression is it denotes one race only, while the mantra of BLM is that whites are racist.

Quinn's BLM protestor statue made good promotion for his work, stating it was only meant to be temporary.  How did he have the nerve, and how did he get away with it?

Quinn is considered a superstar in the social justice art world: one of the YBA (young British artists of the 90's) contemporary with Damien Hirst and Tracey Emin, concerned with 'identity', which explains why the media treat him as a superstar 'godlike'.  The fact that TV channels were there to film it being erected in the early hours, shows their 'worshipful following' with complicit political purpose to their promotion of the BLM movement, which is of very questionable origins.

Quinn works with placenta and faeces, transgender transformation. Who'd have guessed!  He also made a rather self obsessed sculpture of his own head made in 9 pints of blood 'hyper realism'.  Interview by Culture Whisper.

His Instagram shows involvement with gender identity and LGBTQIA.  for those who think 'identity politics have gone too far, its artists like Quinn which are giving it 'god like' status, just as the 'arts' have been given by the media.

Further exploration of Quinn's work on this site.

Bronze statue of Edward Colston, 17th century trader, was removed and thrown into Bristol docks during a 'Black Lives Matter' protest July 2020.  The empty plinth was given a new statue of a BLM protester Jen Rein, entitled "A Surge of Power", but removed by Bristol City Council within 24 hours, who said there needed to be a concensus for a new statue. They were then implicitly allowing vandalism; fearful of any BLM backlash if they kept law and order.   Many news reports covering details of this calamity.

Nick Ferrari of Talk Radio makes point of police making hapless and helpless comment of being without tools, when not stopping toppling of statues.  They had been commanded to allow it to happen.  Police are supposed to support law and order, and not support disorder.

This socially hyped situation is NOT just some angry students making themselves heard, neither in UK as in America.  Investigative trails discover it is a sinister organisation, funded by NGOs, such as bankster Soros foundation.  Videos blatantly show blacks stating they are Marxist trained.  Young schoolgirls are 'captured' by the internet and trained to turn up and how to behave during protests.  The new Marxism is training its army; or so it thinks, when it fact it is just a divide and conquer strategy from hidden forces who have an agenda.

The Left's Long March through The Institutions

Discussion panel: led by Peter Whittle with Melanie Phillips explain how things have reached this stage.